The results are in.

Overall, I would have to say that New Freedom Fest was successful for me. My booth was located just 2 blocks from my house and so most everything was transported via Amish built wheel barrow. Charming, right? Yes. Low carbon footprint? Yes. 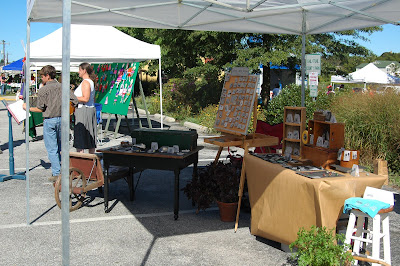 Although I did make money, sales were not what I expected. I thought, given the fact that the economy is not great and that people are unfamiliar with polymer as a medium, I would mostly sell low cost pieces such as $12 posts. Much to my surprise, most sales were over $25 and several people bought several pieces. Who would've guess? 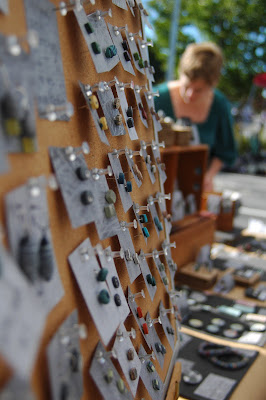 Yes, thats me there. My daughter took all the photos and, bless her, she made me blurry! 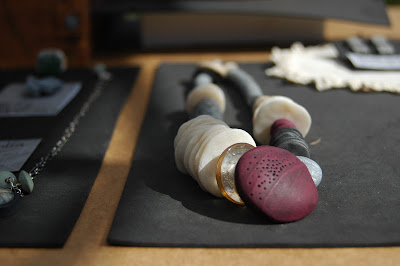 The response from people, even from those who didn't buy, was really positive. Many people were very surprised ("This is polymer clay? I didn't know polymer clay was cool?"). It made me think back to an email I got from Ronna Weltman not long ago. She explained that polymer is still "an unknown quantity". People's unfamiliarity with polymer as a jewelry medium affects their willingness to purchase something made from it and especially so online. Lots of people really wanted to touch the jewelry, to "investigate", if you will. (Two pieces got dropped, surviving completely unscathed. Yes!) 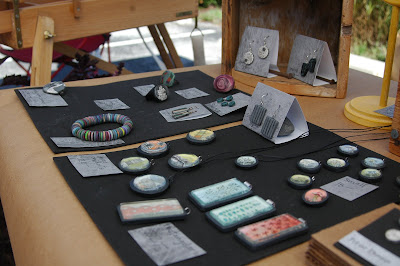 I haven't done a craft show in about 10 years and admittedly I was exhausted by the end of day. But it was good to get the word out locally about my work.
Posted by Genevieve at 6:29 AM