Seven days until my "meet the artist" day at the PA State Museum. I am feeling under the weather probably because I have been working like crazy and haven't gotten the rest I need. 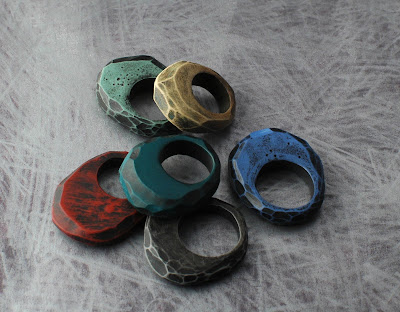 Here is a look at some of the pieces I delivered to The Radius Gallery on Friday . 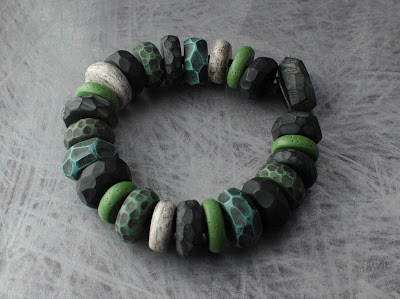 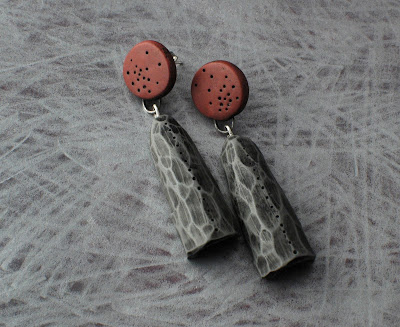 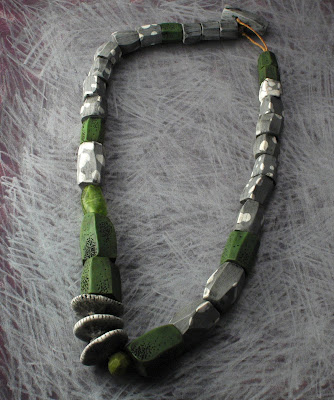 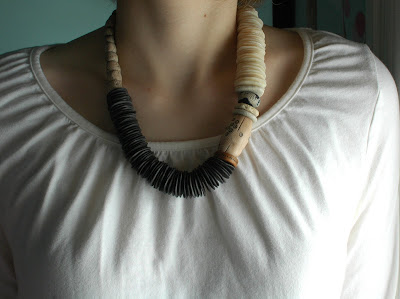 I am still a bit nervous about having to demonstrate. I'll spend time this week researching the history of polymer because I want to be able to talk intelligently about the material. Anybody have some advice about good online sources? 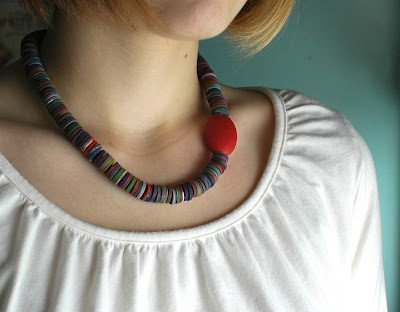 Yeah, that's my name and my earrings in a magazine. Surreal. 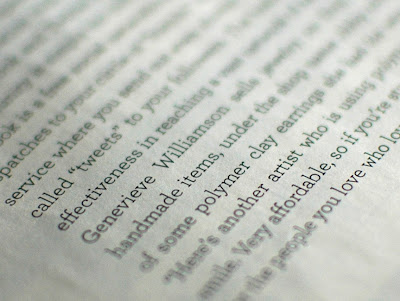 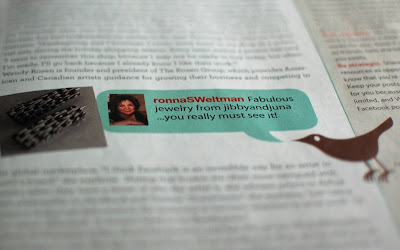 Yes indeed, I was Ronna Weltman's "lab rat" for her social media experiment and subsequent article in the Feb./March issue of Step by Step Wire Jewelry magazine. Over the course of several months last fall Ronna posted about my work on Facebook and Tweeted on Twitter while I watched my Google analytics and sales and reported back via email. The experiment concluded with a telephone interview. 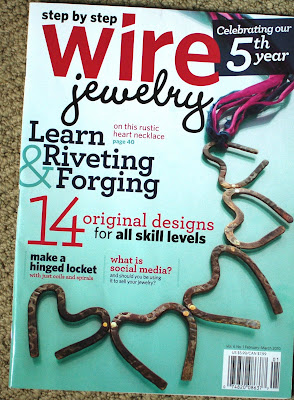 I am very thankful to Ronna for choosing me as her guinea pig. The article in itself has been a great experience for me!
Posted by Genevieve at 8:32 AM 5 comments: 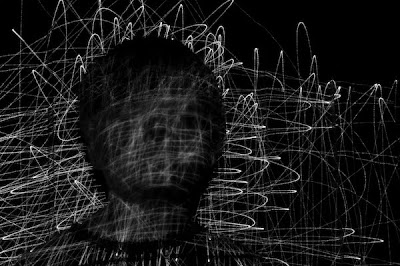 Tonight is the opening at the Yellow Wall Gallery for "Summer in Winter: A Visual Escape". My husband, Kyle, has an amazingly verdant photograph from the Island of Saint Helena in the show.

The gallery is located on the second floor of the Midtown Scholar used bookstore on N. 3rd St. in downtown Harrisburg PA. If you love art, learning, books, the smell of books, the look of books and fancy yourself a bit of a bohemian you will be happy here. The official opening reception and luau (!) will be held from 6pm -10pm and the show runs until March 26 when HOPEFULLY we won't have any more snow and ice to escape.

The image above is from a new series that Kyle is working on. I'm experiencing some mental and emotional turmoil right now and keep thinking its seeping into his work.

See more from him on his daily art blog or at his website. 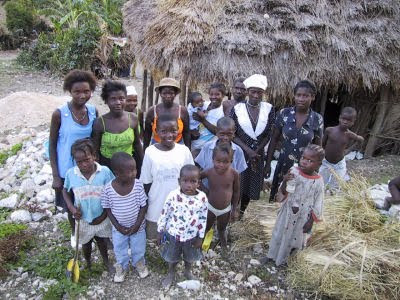 My uncle and several other men, including Jacques, were in Haiti for several days to deliver money and assess the needs of the children at the orphanage. They hoped to move the children to a better location but couldn't. They hoped to purchase a vehicle for Jacques' brother but couldn't. According to my uncle it was a couple of days of learning, making connections and planning the next step. I suspect that one of the biggest accomplishments though was to let the Haitian people know, at least some of them, that people are out here and trying to help. 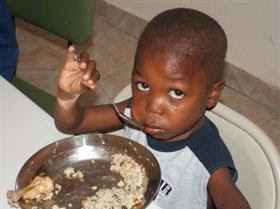 They also encourage and convince the adults to let the children sleep inside Jacques' house (which is several hours from Port au Prince and unaffected by the earthquake). The entire country is sleeping out doors with great fear about going back into buildings again. They are sleeping anywhere they can find space, on the sidewalk and in the 8 ft. median strip of the highway.

Descriptions of the quake from people who were in Port au Prince were that it sounded like a helicopter close to the ground. "Whump, whump, whump", like the blades rotating - but the sound was actually buildings collapsing. My active imagination is struck by that description. You can begin to understand the fear that tightly grips the people now. In the city the stench of sewage and decomposition is constant and my uncle found it horrible that after a couple days he actually started to get used to it.

Jacques does have an up and running website - Source of Life Ministries. Donations can only be accepted through snail mail at this point.
Posted by Genevieve at 7:36 AM 3 comments:

I just had to post about UnaOdd's new faceted rings. Although composed of 2 different materials, wood and polymer, she has put them together in such a way that there is absolutely nothing contrived or artificial about the end result. It is as if the wood and polymer were SUPPOSE to be together all along. 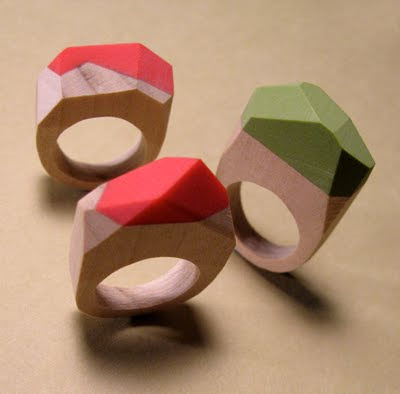 The blizzard raged outside and I worked to a fevered pitch inside. I don't think I have ever had such a productive 24 hours but unfortunately the intensity may have been born out of worry. 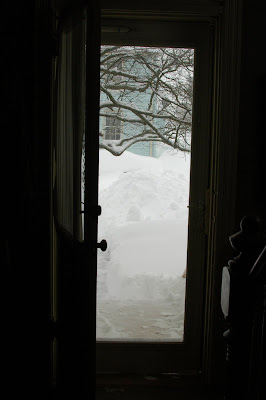 Normally I really enjoy a good blizzard but during this one a friend had a heart attack and the stray kitty we've been caring for went MIA. Good news came late Thursday - my friend is doing really well and recovering from surgery and Bob Cat turned up unscathed. (Anyone need a Maine Coon Cat who is well behaved, talkative and gets along fine with dogs?) 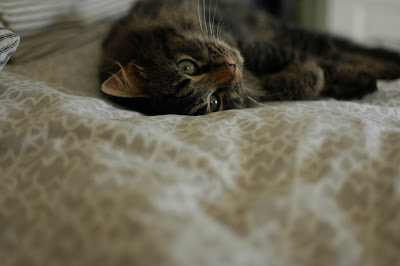 I am struck that this colorful bracelet in waiting was born during these two dark days...or maybe that makes complete sense. The one blue bead was made several months ago and sat unused until I realized it could be the beginning of a chunky carved rendition of my Reef Bracelet. 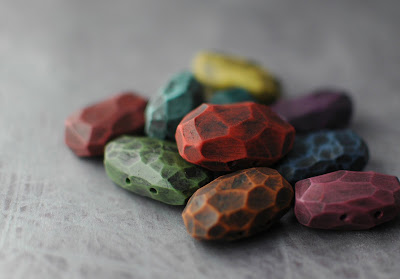 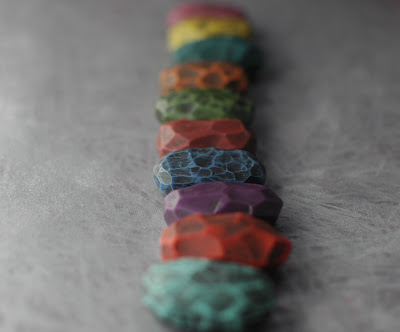 I am carving, carving, varying my carving and varying my finishing techniques. Most of the pieces I am working on now are headed for the Radius Gallery but their siblings will be in the Etsy shop soon. 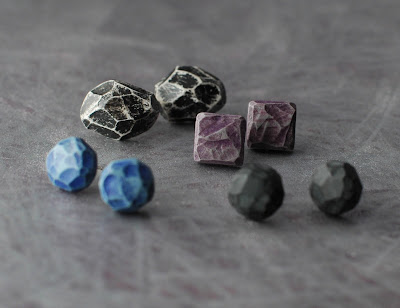 Its nose to grindstone for me right now. I will be the artist of the month at the Radius Gallery at the PA State Museum for the month of March. Its an honor and I am forever grateful to assistant arts curator Jessica Watson who spotted me on Etsy!

I'll have 10-20 pieces of my work featured and will demonstrate (did I mention my fear of speaking in public?) for 2 hours on the first Sunday of the month. 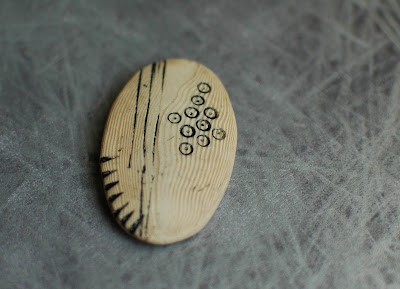 I'll be taking all new work (large necklaces, carved rings...) but I also wanted to use something from the museum's collection as inspiration for some of the pieces. The new mastodon exhibit seemed a perfect jumping off point so I've been working on faux bone. I've found directions for this technique in various places but Irene Semanchuk Dean's Faux Surfaces book is the clearest. Learn first. Mess with process later.
Posted by Genevieve at 4:31 PM 7 comments: